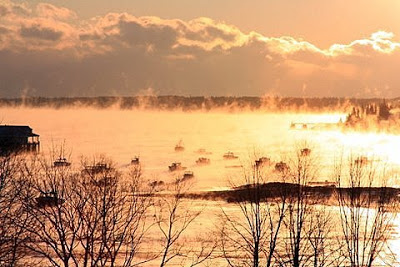 Sea smoke is a cloud over the sea, which could otherwise be called fog, and is usually formed when very cold air moves over warmer water. The physics are in principle similar to lake-effect snow. My husband captured this photo (I must give him credit) early this morning.

Evaporation from exposed water surface depends upon its vapor pressure. If the water temperature is greater than that of the nearby air, the evaporation continues faster than the air can absorb the water vapor, even though the cool air’s relative humidity is 100%. This further evaporates immediately and re-condenses as visible fog, which rises up in convective currents. If the wind blows across cold icy areas like the Arctic, the breaks in the ice sheets where clear water is exposed, the water surface steams up into the air, producing fog.The condition for such fog formation requires not only low surface temperature but also a preexisting surface inversion of temperature to inhibit the rapid development of instability.

1 thought on “Sea Smoke at Sunrise…”