In 1769, James Richards brought his family from New Hampshire to live in the wilderness that is now Camden. He had fallen in love with the area when he came to cut timber for British ship masts. Richards built a sawmill and a gristmill on the Megunticook River near Washington St. His two brothers built cabins close by and brought their families to Camden. During the American Revolution, rebels seized British ships and sold their contents. The British plundered and burned cabins, houses, and mills. In 1779, people feared the British would annex eastern Maine to Nova Scotia and, rather than take an oath of allegiance to Britain, residents of Belfast evacuated to Camden leaving their crops in the fields. The British burned buildings at Camden Harbor. General George Ulmer erected a fort and cannon at Glen Cove and Lieutenant Benjamin Burton protected Camden Harbor. In 1791, Camden incorporated as part of Massachusetts. It had a beautiful harbor with a sawmill and a gristmill on a freshwater stream. It became a market for all the back country for it was easier to sail to Boston or Europe than to walk to Boston. In 1792, Captain William McGlathry built the first ship in Camden at his shipyard which stretched from Chestnut Street all the way to the harbor. Benjamin Cushing and Noah Brooks took over the shipyard in 1800 building and repairing vessels during the War of 1812.

The prosperity of Camden came from the sea: from shipbuilding and ship provisioning, from sea captains and ship owners shipping fish and timber to Great Britain and France. But during the Napoleonic Wars, Great Britain and France prohibited trade with each other and both seized American ships that did so. President Thomas Jefferson levied an embargo, confining all ships to port. New England commerce came to a halt; seamen were out of work; lumber sat on the shore; fish rotted. Many ships eluded the customs officials and sailed to foreign ports illegally. British ships seized American ships and pressed Americans into service in the British Navy. A second embargo caused an economic depression. The War of 1812 followed.

In 1820, Maine became the 23rd state in the Union as part of the Missouri Compromise. Joseph Stetson established the Stetson Shipyard at the head of the harbor and built 70 vessels over 20 years. He invented the “coffee break” to discourage his workmen from drinking rum on the job. A woolen mill and a paper mill went up along the Megunticook River. The first steamboats began operating on Penobscot Bay in 1823. Passengers from Boston connected with a steamboat at Bath that carried them to Owls Head, Camden, Belfast, and north. Great religious revivals held along the coast from the 1830s through the 1880s led to large increases in church membership. The First Congregational Church, which had met in the town meetinghouse since 1805, built its building in 1834. The Chestnut Street Baptist Church was built in 1837. The Methodist Church was built on Mechanic Street in 1841. And St. Thomas Episcopal Church was established in 1855 in a meetinghouse on Mountain Street. In the 1850s, the lime industry flourished from Camden to Rockland. The quarries in Rockland and Rockport were the deepest open-pit quarries in the world. Limerock was burned in lime kilns on the west side of Camden Harbor, at Rockport Harbor, and at Rockland Harbor. Burned lime was crushed to powder, loaded into barrels, and shipped all over the world to be used for mortar, plaster, and many other products. A mill on the Megunticook mixed saltpeter and brimstone to make blasting powder for the quarries. David Knowlton established a machine shop on the river to make capstans, cargo winches, windlasses, steering wheels, and dead-eyes for rigging ships. And the Megunticook Grist Mill ground 35,000 bushels of grain a year. Shipping and shipbuilding made Camden prosperous before the Civil War. Ships built in Camden, or in any of the towns along the coast of Maine, were the pride of America in harbors all over the world. Ship captains from Camden sailed to the four corners of the world, not only well traveled, but also well read, for they all had extensive libraries on board. While Maine basked in the glory days of sail, the nation took notice. The Whig National Convention was held in Belfast in 1840 and in 1860 Abraham Lincoln chose Hannibal Hamlin of Bangor as his vice presidential running mate.

During the Civil War, Camden men fought at Fredericksburg, at Chancellorsville, and at Gettysburg, where Col. Joshua Chamberlain of Brunswick led the Twentieth Maine Regiment to victory in the Battle of Little Round Top. When General Lee surrendered at Appomattox, Joshua Chamberlain and the Twentieth Maine received the surrender of arms. After the Civil War, the railroads and the Industrial Revolution gradually brought an end to the shipping industry that had made Maine the most prosperous state in the Union. As more and more goods were manufactured in America, Americans no longer needed to import those goods from Europe. It was not profitable to sail to Europe full of lumber, lime, cotton, ice, or fish, and then sail for home empty. But ships were still being built in Camden. The Holly M. Bean Shipyard opened on the east side of the harbor in 1875. Holly Bean and his son Robert built 64 large wooden sailing vessels before the shipyard closed in 1920. Horatio and William Alden established the Camden Anchor Works, the largest plant of its kind in the country, supplying anchors to ships all over the world. The Knox Woolen Mill on the Megunticook River produced the endless felts used in the manufacture of newspaper. In the 1880s, the summer people discovered Camden. Sarah Orne Jewett’s stories of nostalgia for the sea. Camden’s deserted wharves and fine old homes of sea captains, and the paintings of Fitz Hugh Lane, Frederick Church, and Childe Hassam evoked a romantic vision of Maine and induced many to come to stay at the Bayview House Hotel, Ocean House, and Mrs. Hosmer’s Boarding House.

In 1880, Edwin Dillingham of Bangor built the first summer cottages in Camden on Dillingham Point. The summer colony at Camden grew to include many prominent families from Philadelphia, Boston, New York, Chicago, and Washington, D. C. who built large, rambling Shingle Style cottages along the road to Belfast and on Beauchamp Point. The summer people arrived on the Boston Boats or on the Maine Central Railroad at Rockland. Local residents, who had formerly gone to sea, found jobs as caretakers, gardeners, and carpenters. In 1891, the Town of Camden separated from the Town of Rockport. Then in November, 1892, a fire-fed by a strong easterly wind-burned the business district to the ground. Right away, Camden businessmen made the tremendous investment to build 12 large brick buildings, the Masonic Temple (now the Lord Camden Inn) and the Camden Opera House. The Great Fire did not discourage the summer people. In 1897, Columbus Buswell built a road to the top of Mt. Battie and erected an inn at the top.

In 1898, a group of friends from Philadelphia established the Megunticook Golf Club on Beauchamp Point. And in 1901, the Whitehall Inn opened on High Street in an old house built by a sea captain. At the turn of the century, six mills operated along the Megunticook River and two foundries used the water power. In 1901, the Camden Anchor works became the Camden Anchor-Rockland Machine Company, building boats, launches, dories, and gasoline engines. In 1912, Cyrus Curtis built the Camden Yacht Club on the site of the old lime kilns on Bay View Street. That same year, Edna St. Vincent Millay read “Renascence,” a poem she wrote from the top of Mt. Battie, to the guests at the Whitehall Inn. One of the guests offered to pay her tuition to Vassar. After graduating from Vassar, ”Vincent” went on to write poetry and plays that made her one of the most famous women in America and an inspiration for the Roaring Twenties. World War I put all the mills to work filling “War Orders,” and the Camden Anchor-Rockland Machine Company built four battleship tenders for the U. S. Navy. During the Depression, summer residents donated the land for the village green, the public library, the amphitheater, Harbor Park, and the Public Landing. Students from the Curtis Institute of Music in Philadelphia gave concerts at the Camden Opera House. Carlos Salzedo founded the Salzedo Harp Colony and each summer held a Harp Festival in the amphitheater beside the library. A CCC camp gave young men jobs building roads and hiking trails on Mt. Battie and Mt.Megunticook.

In 1936, Captain Frank Swift began operating windjammer cruises on old sailing vessels, and the Camden Winter Carnival led to the creation of the Camden Snow Bowl at the upper end of Hosmer Pond. World War II brought prosperity to Camden. The CCC camp became an army camp, and the mills went to double shifts. The Camden Shipbuilding and Marine Railway Company, located at the old Bean Shipyard, built 30 vessels in three years, and Eleanor Roosevelt came to christen the first barge in 1943. After the war, the CCC camp was given to the State of Maine and became the Camden Hills State Park. In the 1950s, artists and writers began moving to Camden. Local artists organized Maine Coast Artists in Rockport. Wayne Doolittle began publishing Down East Magazine from a little house on Bay View Street in 1954, and in 1957 Twentieth Century Fox filmed Peyton Place in Camden because the quaint, old town looked like an American icon.

In the early 1980s, Camden was named one of the ten best places to retire, and many did so: doctors, diplomats, corporate executives, authors, and retirees from the CIA. In 1988, the Knox Woolen Mill closed. MBNA, the credit card giant, occupied the mill from 1992 to 2004, when the old mill was converted into retail shops and condominiums. Today, the little town where the mountains meet the sea is truly the way life should be, for Camden still has fields and forests, hiking trails, stone walls, starry nights, rockbound shores, and the beautiful, historical architecture of sea captains’ homes. 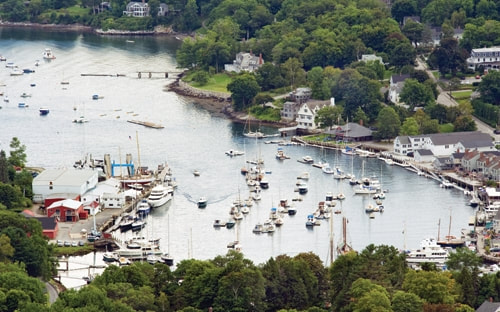 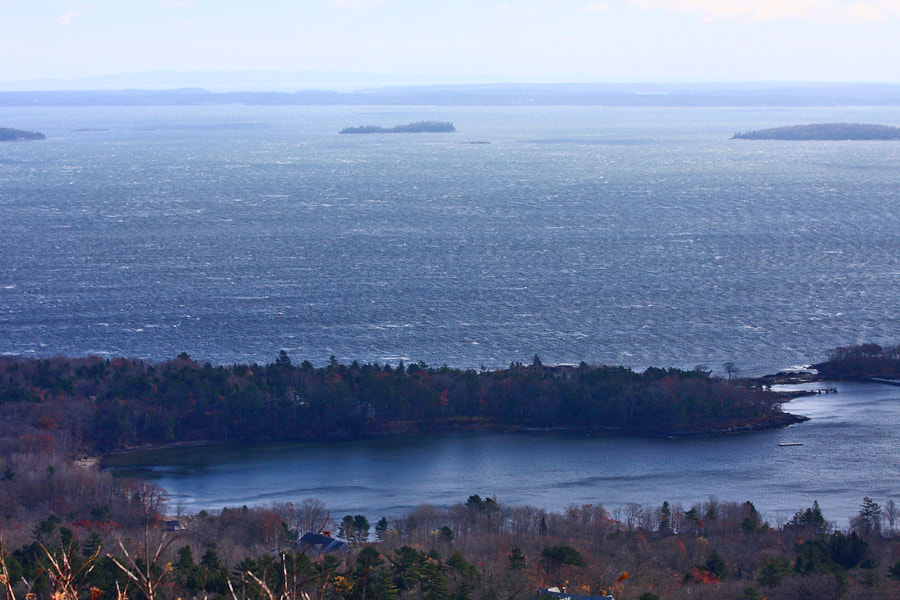 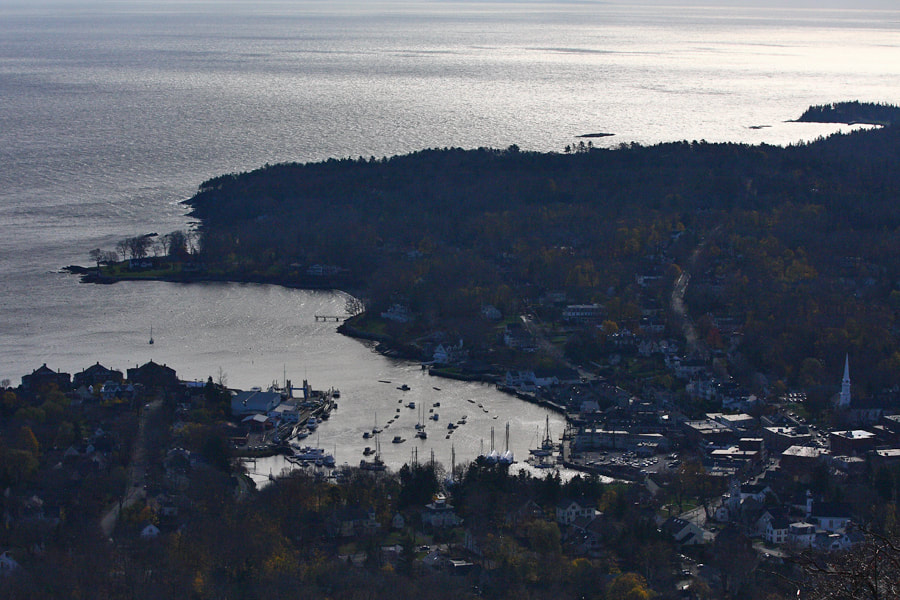